I've not shared a lot of the project- just a select few clips, because a) I'm currently unsure of where the project is exactly going and b) I don't want to give all of it away before it's completed. That being said, I know it is going to be the basis of my next short animated piece. The last short I completed in full was in June last year, called 'Nothing New'. It was a collaborative piece I made with my good friend Alan Livesey. We still haven't published it online yet, because we're still waiting to hear back from a couple of film festivals, though when we do, I'm sure you will know about it!

One of my goals for 2020 is to complete two short animated films, which this will be the first of. I'm making better progress with it than I thought I would be before I started the project, because I found a shortcut in how to colour the clips. After almost four years of using TVPaint I only just discovered it a couple of weeks ago! Insert face-palm emoji. Anyway, you basically change the source on the paint bucket tool to 'display' and hey presto colouring each clip is much, much easier! I was doing it the manual way, where I painted each layer of colour under the outline layer. Yes, it did take f o r e v e r. 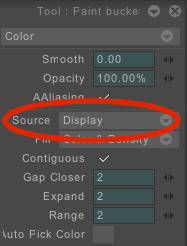 The film is currently untitled and currently sans synopsis (not a new typeface name), though when this part of the whole animation is complete, the rest should fall in to place. Fingers crossed! It's mainly just fish rotoscoped on some 16mm film, which I applied indian ink to and ran it through the projector.

...and here's a clip of a section which I coloured in, condensed into 53 seconds: