With both the Championship and WSL teams having been added into the draw for the fourth round, I knew it was going to produce some really exciting ties. The one which caught both mine and Ben's eye the most though, was Tottenham Hotspur Women vs Barnsley FC Women. While Tottenham the newly promoted side in the WSL sit seventh, Barnsley stand top of the FAWNL Division One North. Three divisions lower than Spurs. If that doesn't sound like an exciting draw, then I honestly don't know what does. 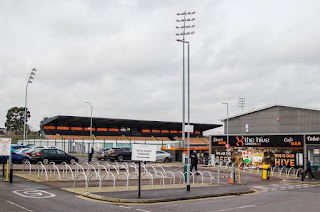 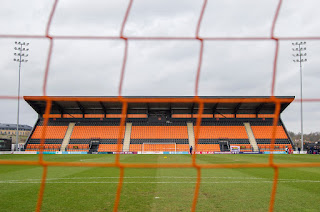 Having previously seen Barnsley against Crewe Alexandra in the First Round Proper, this was obviously a fixture I did not want to miss. Tottenham play at The Hive, home to both Barnet FC and The London Bees, a 6,500 (5,419 seated) capacity stadium based in North London.

An aesthetically designed new build (opened 2013), clad in orange and black made for a pleasant contrast against the overcast sky. The stadium consists of four separate stands: two large seated ones, with a smaller seated family stand and media area along one of the long sides. There is a terrace at one of the goal ends. The large main stand was open for this game, as was the smaller long stand. Both contained all 621 spectators. All four corners of the stadium were open and when facing the large stand, you could see trains passing. 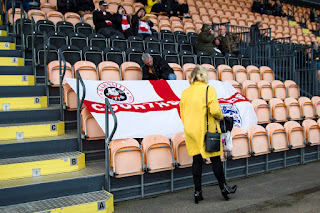 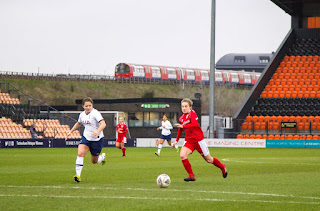 As Tottenham are in the WSL, I acquired photo accreditation for this match, meaning I was able to go pitch side (rather than be restricted to one spot in the stand) and had to wear one of those bibs. It probably makes an improvement to my dress sense, maybe! The accreditation was secured a few weeks ahead of the tie, so it was just a case of keeping my fingers crossed for no rain..! 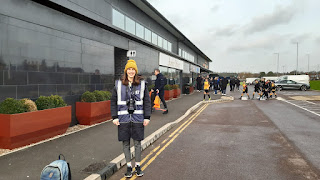 We set off from Preston at 8am on Sunday and arrived at the stadium in good time before the 1pm kick off. This left me plenty of time to collect my pass and take a sufficient amount of photographs of the ground before the game began. I was also able to identify a couple a good photo spots around the ground, for when match was in play. We bumped into our groundhopping friend Paul who is also following the Women's FA Cup, so it was nice to catch up with him and provided Ben with some company in the stands while I was sat pitch side. Thankfully Ben was able to take the Monday off work in lieu of an extra day worked, so we wouldn't have to do eight hours of driving in one day (phew), so we thought we would make a mini weekend of it and watch a couple more games on the Monday, before heading back up north.

With Spurs being a full time professional team, it was almost a given that they would come out of this round jubilant, though with Barnsley in such a good run currently, they were perhaps the team to cause an upset. After a strong start, it looked like this might have been the case, though it was twenty minutes in when Spurs broke the deadlock and doubled their lead not long after. They were then awarded a penalty, which Ayane put cleanly away, advancing their advantage. 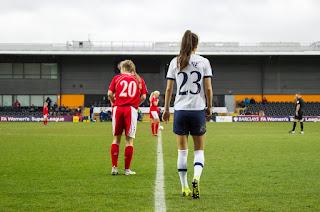 After fifteen minutes respite, the teams were back out. The temperature had dropped and the skies looked even more gloomy. It looked like it was about to rain at any moment, but it seemed to be holding off- at least for the time being. The second half saw Spurs tally up a further two goals, with Barnsley still pushing to get on the score sheet. Unfortunately for them, this didn't happen, but to keep a mid table WSL side to just five goals showed how strong their performance was and should definitely come away feeling proud. 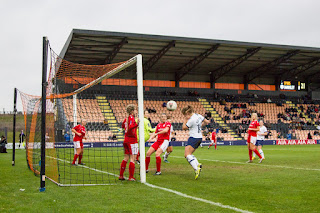 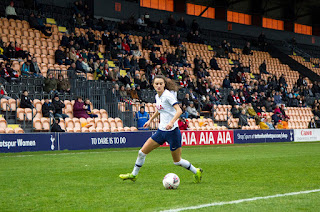 The rain did end up coming, though a lot later than forecast, but it had me heading for the stands to enjoy the last fifteen minutes of play with a roof above my head. Overall, it was definitely worth making the trip for and the match lived up to it's expectations (or at least mine)... 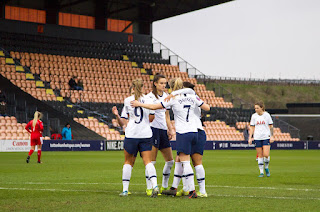 Spurs have drawn Coventry away in the last sixteen of the cup. They currently stand at ninth in the Women's Championship and play their home games at Butts Park Arena. 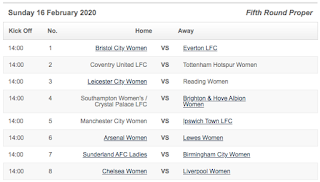 You can view the full photo set here.