With only eight ties to choose from in this third round proper (four north, four south), it was inevitably going to be a harder round to watch a match in. Having been to all of the northern grounds bar one, it was naturally a trip to The Loughborough University Stadium to watch Loughborough Foxes Women take on Huddersfield Town Ladies.

Both teams play in the FAWNL Northern Premier Division, so a competitive affair was expected, though Huddersfield are at position 5, while Loughborough currently sit at 10th.

Having only been to Loughborough once and not had a proper look around (I went as a child to play in a cricket tournament), it was another reason why we didn't decide to travel to the second nearest tie at Watford. We actually decided to make a weekend of it, so booked a place near Loughborough, which afforded us to take in a Sunday league game in the morning, as well as having a little look around the town centre itself in the afternoon before walking to the stadium. 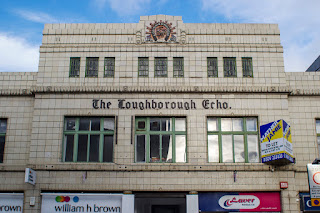 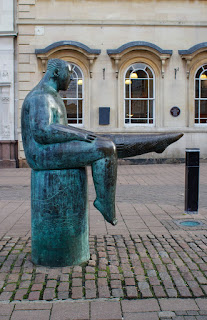 Walking from where we parked the car, via the town centre to the edge of Loughborough University Campus where the stadium was situated, took around twenty minutes and from there, it was around another twenty to the actual stadium. The campus was vast and like a small town within itself! We eventually found it, with around ten minutes before kick off. The entry was free though with a donation bucket, which of course we obliged. There was also a team sheet, but no programme. 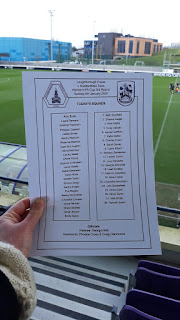 The ground was a new build, opened in 2012. It was a (very well kept) grass pitch, with an artificial 'cage' adjacent, where there was a men's match being played. One of the long sides was taken up by a large seated grandstand housing 300 covered seats. This is where we started watching the game- mainly to get a couple of overview photos, but also because we were unsure on entering whether we would be able to watch the game at ground level. We soon realised we could, so after getting slightly lost within the building, we eventually found the exit which lead us to pitch side. Here, there was ample stepped contemporary terracing (capacity of 3,200) around all four sides. 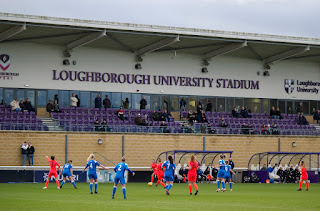 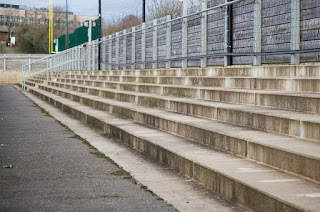 We did our usual lap of the ground, taking photos at regular intervals, before it got too dark to take any more. This brought us back around by the time 45 minutes was up and we went back in the grandstand building/ clubhouse for a coffee (£1pp).

The first half would have upset the bookies, due to Loughborough scoring twice, despite them being positioned five places lower than Huddersfield in the table. Both teams played some excellent football throughout, each having ample shots on target forcing each keeper into making some brilliant saves! 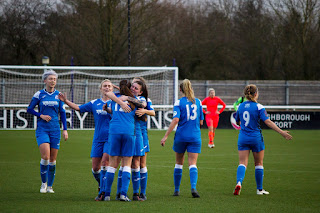 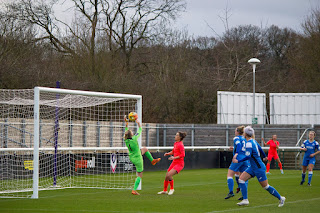 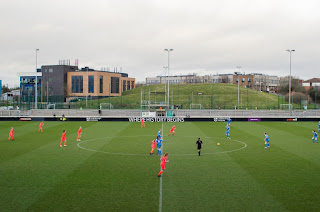 For the second half we decided to sit in the stand, due to having taken enough photographs in the first half and to get a different perspective of the game. It was a great view and we sat with fellow hopper John, who is local to the area. The second half kicked off and Huddersfield seemed to have come out from the break the stronger team, holding the majority of the possession. 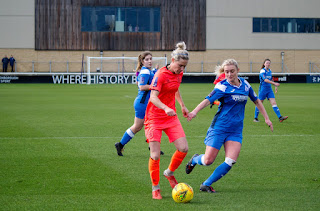 Just over twenty minutes in, it was the visitors who scored and then equalised eight minutes later. Loughborough took their chances when possible, replying with multiple shots, though failing to get another mark on the scoresheet. It was Huddersfield who then scored the winning goal. A late resurgence from Loughborough almost had them equalise, though the ball strayed wide of target. 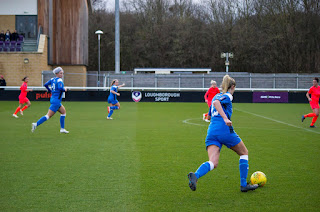 A really exciting and competitive game as expected, with both teams fighting hard until the end. I'm no pundit, but Loughborough definitely put in a strong performance against a competent Huddersfield side and either team could have come out on top. 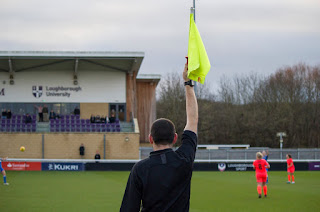 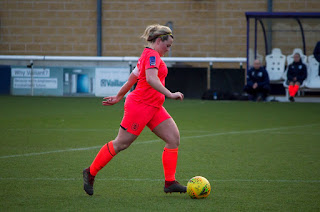 The fourth round draw takes place this evening (Monday 6th), with the addition of the WSL and Championship sides. There could be some really interesting ties drawn out and perhaps even some upsets in the next round, which takes place on Sunday 26th January.

Email ThisBlogThis!Share to TwitterShare to FacebookShare to Pinterest
Labels: #RoadToWembley