Those eagle-eyed out there will notice that I have removed the word 'test' between the word 'EbSynth' and the number in the title here. This is because I feel that I'm not really testing the software anymore, I am now just using it. I have had so much practise with it in my job, I am now competent with it, so I guess anything like this would be more of an experiment, rather than a test. Because I am experimenting with different mediums for the keyframes etc, rather than 'testing' the software. I hope that makes sense!
So for this piece, I had the urge to make a keyframe (which will translate into the final look of the animation) using felt tip pens. I've been wanting to do this for a while, but because of work and football, I haven't had that much time to make new roto outlines for a new piece. Therefore meaning I haven't been able to experiment with different techniques. I then thought, well whatevs, I'll just use some old outlines for now as I really wanted to make this clip! I had no intention of posting it anywhere anyway (probably b/c I thought it might turn out rubbish- jesus wept my confidence in my ability is literally rubbish: note to self- this needs work!), so thought that using old outlines wouldn't matter. (Spoiler alert: the piece came out great so I did end up posting it places and you know what? No one cancelled me for using outlines I had already used on a different project)!
I printed out one of the frames from the outlines, attached a piece of tracing paper (this was so the keyframe wouldn't have any of the outlines on) and coloured it in: 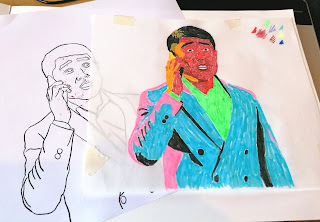 I then scanned this in, imported it into my TVPaint outlines file, adjusted it so it fitted within the outlines. Then put it through EbSynth. Note: this post isn't a tutorial in using EbSynth- but I might do one of those eventually. So apologies if this doesn't quite follow.
There wasn't loads to touch up on this piece actually, which I thought there might have been. This is because how I have been using EbSynth for work has been using keyframes/ styleframes created digitally, which is why I was a little uncertain how this result using an analogue medium would look. I needn't have worried.
And, I absolutely love the result, so definitely more analogue EbSynth stuff on the way...
xo
Posted by Flora Martyr at Thursday, September 30, 2021 No comments:

A week or so ago, you may remember I said I was hosting an animation workshop as part of the Collective Weekender happening in Preston. It was a four day mini arts/ creative festival which took place in various locations around the city celebrating the variety of talent and artists living in Preston. There were loads of workshops and performances open to the public and more importantly, all FREE. Free arts is something I am a big advocate of, because I feel arts should be accessible for all, regardless of your financial situation or background. There's so many barriers in the arts and I could go on, but that is probably for a whole other blog post!
Here's the result of what we created:
Unfortunately no one besides my boyfriend turned up for the event (which was still super fun as we had a brilliant afternoon drawing horses together!), but quite disappointing on the whole. I put a lot of planning and preparation into the workshop and in all honesty it was quite an anticlimax when I realised that I wasn't going to get any attendees. Perhaps it was because of timing- I mean a Thursday afternoon might not have been the best time for this kind of thing. Or maybe I didn't promote it enough (though there's only so much I can/ want to spam my IG/ Twitter accounts). Or perhaps lack of friends in Preston (maybe I should spend less time in my room animating and do more socialising). That thought scares me..!
Whatever the cause was, on sharing the final outcome from the workshop on social media after the event, I had a lot of positive feedback which makes me think that next time I do something like this, more people will show up. Plus over the course of the weekend I met a lot of other Preston creatives by attending several of the events, so I feel like I have since widened my network.
The other events I attended were the Cyanotype workshop with photographer Nicola Lewis-Dixon. This was really fun as I've never done one of these before (basically cameraless photography). I'd love to try this out more in my own time.
The writing workshop hosted by writer and filmmaker Su Moffat. I've not attended many writing workshops (or at least not as an adult- I remember a few when I was a kid) so I didn't quite know what to expect. Though Su was really good at encouraging ideas and offered some great tips/ prompts for improving creative writing and pulling out a story.
The other event I went to was the portrait painting workshop with artist Sally Dyer. I've not painted in a way which isn't abstract for quite a few years, so this was a fantastic workshop to get back into painting. Sally was great and offered as much or as little advice you needed or wanted. Unfortunately I didn't quite finish mine in the timeframe, but the workshop was really enjoyable and relaxing and has definitely inspired me to start painting again!
If I had the time, I would have loved to have attended more of these events- they all sounded fantastic and from the photographs afterwards, they looked great, too! I really hope this momentum and community of creativity in Preston continues, because it actually feels really good and positive at the moment.
Talking of which, there is actually SO MUCH GOING ON IN PRESTON right now and it's all so cool!! If this ain't the place to be in the North West right now, I don't know where is.
We got a Wallace and Gromit bench installed: 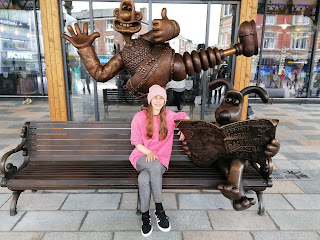 Lancashire Encounter is happening right now. Head here for the line up. There's also a lot of top class poetry/ comedy/ performances coming up, hosted by Enjoy the Show events promotion. Preston has also just released it's 12 year cultural strategy- read more about that here.
So, see you in Preston then, yeah?
Posted by Flora Martyr at Sunday, September 19, 2021 No comments: 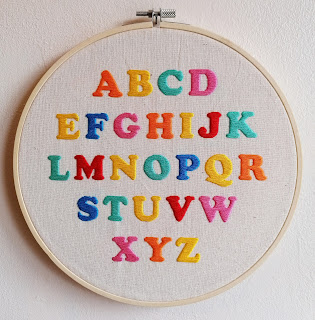 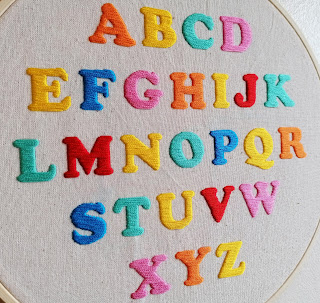 Embroidery in August has been slightly slow (work, football and other stuff which happens in life have been obstacles), but I did get this one piece completed, which I'm really happy with. It's a gift for a friend who has recently given birth, so a colourful alphabet seemed an appropriate thing to sew for hanging in the baby's room. The design is pretty minimal, but I feel the simplicity of it combined with the bright colours (DMC threads are the best!) make it a really impactful piece.
Not only this, but I have also sorted out my sewing box, which was a HUGE MESS! Like threads tangled and cotton reels flying everywhere. Hopefully this will encourage me to embroider even more- it is something I love doing alongside animation and football as it's still creative/ productive, but also super relaxing and fun. Perhaps I should combine the above and make an embroidered football themed animation?! Maybe- I'm sure I'll write about it on here if I do...
Posted by Flora Martyr at Saturday, September 04, 2021 No comments:

Email ThisBlogThis!Share to TwitterShare to FacebookShare to Pinterest
Labels: Sewing 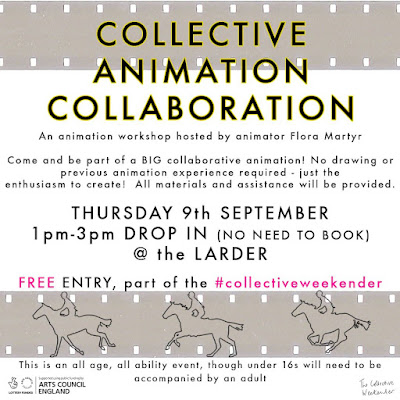 I know I’ve been quite quiet on the animation front lately, BUT (and that’s a big one) I am hosting an animation workshop next Thursday (9th September) at The Larder.

The workshop is a drop in from 1-3pm, where you can be part of a BIG collaborative animation. Also, you don’t need any prior animation experience- just the enthusiasm to create! How cool is that?! All materials and assistance will be provided. Hot drinks and refreshments are available to be purchased at the venue- would recommend!

This is part of the #collectiveweekender, a 4 day creative festival across Preston, celebrating the diversity of the creativity that goes on in and around Preston.

The events range from photography to poetry, from dance to drawing and EVERYTHING (yep, everything) in between!

Hope to see some of you down there xo

Posted by Flora Martyr at Friday, September 03, 2021 No comments: