I'm an artist, therefore rejection is something I know only too well. I'm sure there's many of you out there whom also feel the same/ share the same experiences so I thought I'd focus this blog post on that, so we can all have a cry as one big rejected artistic collective.

It's also because earlier this week, I was unsuccessful for some funding (probably not going to say which funding I applied for) for an animation I'd really like to make. I put a lot of time and effort into the application and also towards researching and writing the animation and so on and so forth. On Monday it was submitted and on Wednesday it was rejected. At least I was put out of misery quickly! Silver linings and all that...

I also just received an email regarding a film festival submission. That too, was rejected. COME AT ME REJECTION. I AM HERE FOR YOU.

I was annoyed directly after I received the email, because it felt that all my hard work, time, effort and future plans had been put to waste. Despite this, my despair/ annoyance faded away fairly quickly, as I know I can't do anything about it and I just have to move forward.

If this happened one year ago, then I'd probably be dwelling on it for a while, but over the past six months, I've been changing my outlook on life/ my thinking pattern and have learned to deal/ cope better with things that occur in my life which are out of my control. Also, I've had more rejection that ever this year, due to that task of job-hunting.

I think one of the main things to help dealing with rejection is acceptance. If you can at least accept how you're feeling or can accept that what's happened has happened, then you're on the right track. If you continue down the "woe is me" path and let these setbacks knock you down, then you're going to have trouble getting over them. Yes, it's annoying, especially when it's a project one is so passionate about (or you have a constant stream of rejections), but if you let things out of your control get to you, then you'll never make what you want to make or be happy or satisfied with your situation. You can't control life, but you can control how you deal with life #preach

Another thing I find useful in dealing with rejection is not having any expectations or hopes. Wait, that's not meant to sound so depressing: "have no hope"- really, it wasn't! What I mean is don't get your hopes up or expect that because you believe in your project (can be applied to anything i.e. relationships, jobs etc), it doesn't mean someone (or everybody) else will. And you've got to understand this. Nobody owes you anything and not everybody thinks like you, however nice that may be if they did...

I believe if you want to do something badly enough, then you will be able to do it. It might not be what you've originally had in mind because of time or budget for example, but if you let go of your idealisms and free fall into the future and ride with everything life throws at you, then it's actually quite exciting! Maybe you'll realise through rejection, you choose a completely different path to go down and you end up preferring that one. Who knows...

So go forth, embrace rejection and make some amazing art!!

Apologies for how happy and cliched this blog post sounds! MAYBE. But positivity is good, amiright.
Posted by Flora Martyr at Thursday, September 29, 2016 No comments:

I missed last weeks one of these, see last blog post.

So today I have you this:

This was the first bit of rotoscoping I did, back in 2011, for a music video which may or may not be the next one of these tbt posts!

I did it with a trackpad mouse- this was before I had a graphics tablet and it took AGES!

I'll admit that it's not the most exciting of animations to watch, but it's the foundations to where I am now with rotoscoping. I guess it also shows how tentative I was, perhaps, to experiment with the medium at first, whereas now if I tried rotoscoping for the first time, I think I'd just go all out!

At this stage, I was also fairly new to Adobe Flash, too.

I haven't actually done any animation/ rotoscoping for a while now- something I'd like to get back into- and plan to do so, soon.

With this tbt posts, I think I'll start doing them every other week from now on, as I don't want to run out of old films before I've made a new one!!
Posted by Flora Martyr at Thursday, September 15, 2016 No comments:

Look I Made A Cake!

Apologies for lack of posts recently- I missed #tbt, too :(

I have been insanely busy, working on a couple of videos alongside my "proper" job- which is working in a bowling alley (it's not as glamorous as it sounds!), so unfortunately, blogging had to take a short hiatus. But I am BACK, so never fear! Or maybe DO fear. I might be about to scare you.

I think baking counts as being creative, does it not?

I've been saying to my housemate for a while now, that I'm going to make a cake and on Thursday of last week, I did just that: 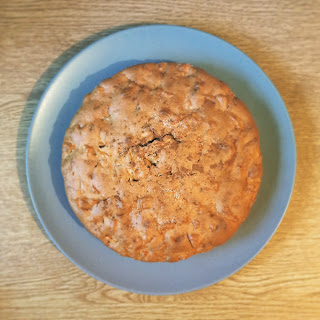 It's an apple and cinnamon cake, one of my favourites from when I was younger (I often used to bake when I was a child).

For having not baked in about four years, it turned out really, really well. It was cooked for the right length of time and it was a good consistency. If I made this again, I think I'd use one more apple to give it a bit more moisture (the recipe said "three or four" and I used three- being tentative and not as confident as had not baked in quite a time) and I would also add a bit more cinnamon. Besides those points, it was a job well done! I think I'm going to make it a weekly thing, but a different cake every week. Maybe one day I'll make something super extravagant! We'll see...
Posted by Flora Martyr at Sunday, September 11, 2016 No comments: