It's been quite a while (2015) since I've worked on 16mm film. I have incorporated it into projects since, as I've lots of footage left over from unused loops, though not actually created anything using the medium itself for around four years. A bit of background for those unfamiliar with the technique, is that I use blank film leader and manipulate it in multiple ways, such as painting, inking or scratching, to create various effects. It is called camera-less animation. The films by Stan Brakhage are excellent examples of this technique. He is considered a very important and influential figure in experimental film and rightly so.

Whilst working on a short animation and was using some of my old 16mm pieces as backgrounds, I thought that it was definitely time to create some new material/ footage. After trawling through eBay and realising I couldn't find any clear leader on there for a reasonable price, a quick Google search lead me to Hollywood Film Supplies. Despite the long wait the website stated for it to be shipped from the USA, I decided to go about purchasing it anyway, as the product was perfect for what I wanted. It actually took a lot quicker than anticipated to arrive, so definitely would buy from them again.

For the effect I wanted in this piece, I decided that using Indian inks would be the best medium. From the previous 16mm films I have made, Indian inks demonstrate the perfect qualities for this type of animation/ filmmaking. I initially started using acrylic paint, though quickly decided against it, because it wasn't as opaque as the former and would have resulted in the colours turning out quite dull.

I wanted to achieve a marble type look, with lots of colour and texture. I feel I managed to create the colour and the texture I wanted, though I feel the final outcome is a little too 'bitty' and more sporadic than I would have hoped. There's more white/ blank space than I wanted. I did actually buy two reels, so on the next one I think I might apply the ink more directly, perhaps by the means of a brush, rather than the random splatter/ pipet method I used this time. Nevertheless, it did have places I felt suitable for use as the backgrounds in my latest animation:

Below are two photographs I took of the work in progress, at various stages of adding the inks. You can see that the ink is quite spotty: 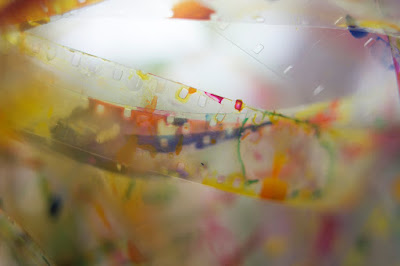 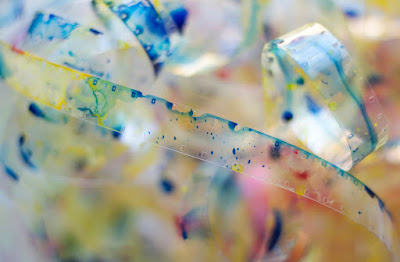 Being as I only used about ten seconds (if that) as part of my animation, I'm going to use the full 16mm piece for another project. It was quite a lot of work to create and I feel the 16mm is much more worthy than being used for just a ten second clip as a background in another project. Watch this space!
Posted by Flora Martyr at Thursday, July 04, 2019