Well being as cross stitch is all of a sudden my main new hobby, it's only right that I track my progress on this blog, right?!

Since completing the animated horse cross stitch and another quite well developed design (see below), I'm now feeling a little more confident in my ability with these, especially in terms of making my own designs, through to execution. I like to think I know more about what looks 'good' (and what doesn't) on a design. 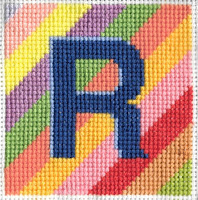 After completing the one above, I really wanted to develop it a little in terms of creating something in a similar light, but using a more challenging design. This would also make the final outcome less 'basic' and provide me with new challenges along the way. I do like a challenge! What I really liked in the one above was using the full square and the bright colours. These were things I wanted to bring forward into my next project. Tbh I only used the full square to cover up some wrong markings I made for a previous project, but I like it and who needs to know anyway?!

I was doing my usual Google image and Instagram searches for some inspiration to see what sorts of things other people were cross stitching and yep, people are basically cross stitching everything! No help there then... Well it kind of was, as I was then sort of overloaded with inspiration and ideas. Yay! What I really liked though, was the use of patterns people had created behind designs and I wanted to have a go at that myself.

So, I made a repeatable pattern on Photoshop- yes I know you're meant to use illustrator for creating drawings, but Photoshop is basically bae to me so I use that and I don't even care: 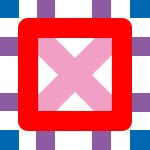 The pattern did take some trial and error, but eventually I got there with a pattern that I felt would work for the effect I envisaged. I then created an elephant from this screen grab from an animation I made a while back: 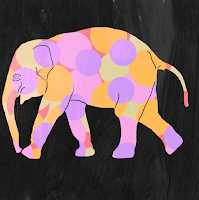 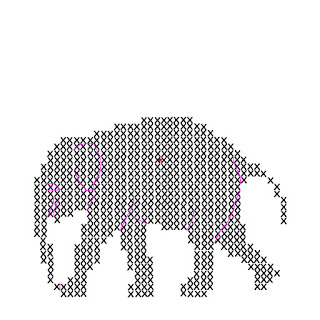 And finally, I added the repeated pattern: 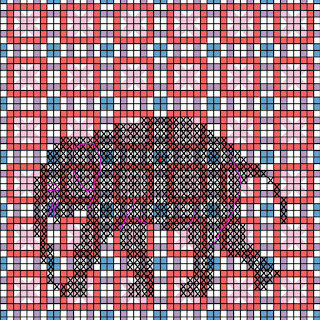 I didn't want to elephant on the final design to be a black silhouette, because I thought it might look a little too plain and simple, which I was really aiming *not* to go for in this design. Instead, I opted for three dark colours to repeat every five lines. I went with black, navy blue and a dark green colour which I'm not sure what the exact name of it is! In my opinion, using these stripes added a little more detail to something which wouldn't have been *that* exciting if it was just one colour.

With the pattern, I wanted it to contrast with the elephant as much as possible, so I used pinks, yellows, reds etc. Sewing the pattern was quite straightforward, though took a lot of time- these full 3x3 inch square ones take a substantial amount of time to create. I do like the size though: I feel they're quite manageable and can be completed across a couple of days, rather than something larger which might take a week or so to complete.

It was difficult choosing colours, because I'm running out of a lot of my threads and needed enough of one colour to last the amount of squares needed to fill for the designated colour. It's hard to tell how much thread you need to complete one section just by looking at it, but the more of these I've been doing, I find it's getting a little easier to estimate. I need to get out more. Oh, wait... My thread box is also a hot crazy mess right now and it super needs sorting. I'd love to get one of those boxes which has separators or drawers in, so each colour of thread can have its own section, ideally labelled too with the number of thread colour. Anyway, being as nothing of those are 'essential' items, they will have to wait until this has passed and it's safe to acquire 'non essential' items again. 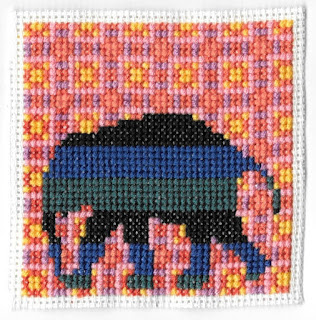 This cross stitch did achieve what I wanted it to in terms of creating something more complex. I would like to continue and develop on this going forward as I really liked the way it turned out and already have some inspiration and ideas in how to take it further. If anyone has any questions or suggestions then let me know in the comments!
Posted by Flora Martyr at Thursday, April 02, 2020