As a lot of the pieces I’ve been doing recently were mainly using just outlines, I wanted to divert away from that and bring back using colour. However, I didn’t want to use outline and colour in the traditional sense, but wanted to develop and build on what I created in the in the video below:

I created this piece using solely blocks of colour to create the figure, which I really liked the results of but wanted to see what else I could do with this technique. I had an idea to use some lines but in a really limited sense, though with the main emphasis being a piece without any outlines. I was thinking something in the manner of the style I used in this short film I made towards the end of 2018:

I like the fact that no outlines were used, but instead used what I call ‘inlines’ to show creases on clothing and lines on skin etc. Since creating this, I have progressed massively in my work and I wanted to make a clip which reflected that. I had the idea to use an amalgamation of the two techniques (so the inlines in Cardigan’s Corner Shop [above] and the colour blocks in the experiment of the person smoking) to see whether I could work them into a useable style for future projects.

It comes about because what I do is often quite flat and blocky, which is fine, but it’s nice to add a bit of depth here and there to mix up what I’m able to achieve in my practise. I came up with a super rough style frame to check if my idea would work in terms of combining the techniques (obv. the colours etc are off, but just wanted a quick proof of concept). I decided it would look how I wanted it, with a few tweaks here and there. 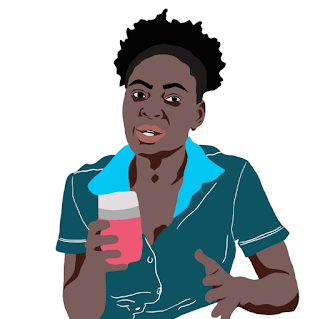 In the final version, I actually wimped out quite a bit and didn’t do as much shading on the character’s face as I did in the style frame. In retrospect, I wished I had gone a bit further as it probably would have turned out stronger. I did add a lot more shading to her arms/ hands though, whereas in the style frame I did not. I feel this paid off as I love the shadows here.

On her top I didn’t do any shadows, but just used the inlines so we can see the creases of her shirt. This was a choice I made in order to differentiate between her clothes and her skin to make the two appear contrasting and have a firm telling apart of both. I also used coloured lines on both her shirt and her skin when needed, rather than using the ‘black cartoon outline’ which is ingrained so many animations. Not that there’s anything wrong with that, I mean I use it all the time and it’s used pretty much everywhere, but this piece I wanted to feel different. I think using a darker shade of the colour works just as well as using a black outline or black shading, though makes the piece appear softer overall. This could either be a positive or a negative, depending what effect you want to create.

I’m pleased with the outcome here and I definitely achieved what I wanted in terms of combining two styles I’ve previously used. However, there are some things I would do differently if using this style in the future, such as more shadows on her face and maybe even try a mixture of shadows and inlines on the clothing.

This piece was also quite time consuming- perhaps because of the combination of lines and shadows, and being in full colour. It took a little over 44 hours to complete for 8 seconds of video. But the more detail a piece encompasses, the longer it will take. I don’t really mind as I think the result was worth it, but it’s something to consider when deciding a style for my next short film.