As some of you may know, I find visiting and playing at different bowling alleys a perfect accompaniment to groundhopping. In 2019 I bowled at 39 different bowling alleys, which is slightly less than the 42 I bowled at in 2018. This brings my total tally up to 118. Despite this, it has still been another good year of bowling, visiting some interesting centres around the UK and beyond:

My highest score this year was 214 (Pro Bowl Airdrie), though I still haven't managed to top my all time highest of 221, scored in 2015 (on lane 14), at my local bowling alley in Preston. 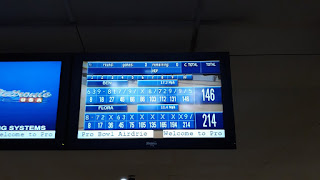 Also of note this year, both me and my partner Ben reached our landmark 100th centres: mine, in June at The Garage Kilmarnock and Ben's, more recently at Spectrum Bowl Guildford, in November. 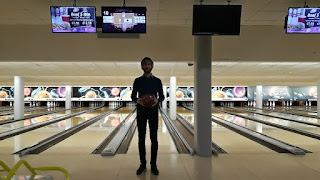 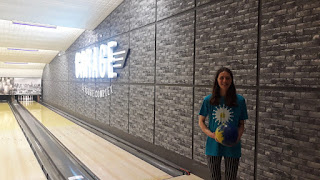 I don't like to be negative that often, but the worst one I visited this year was Hollywood Bowl Liverpool. When we visited, it was the only bowling alley in the city, which for Liverpool being such a large and vibrant place, it's only bowling option proved very poor. Now, they have a boutique bowl (Lane 7) in the centre. I visited this one in September and it was a much better experience overall. 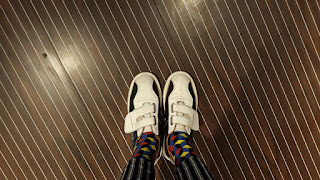 Negativity aside, I'll move on to some of the highlights. First up is Rowan's Tenpin Bowling, situated in the Finsbury Park area of London. This was high on my wish list and it didn't disappoint. Here's a mini review:

£1 admission gets you through the turnstile (yes, they do have a turnstile) and into the entertainment complex, housing more than just a bowling alley: it boasts a large arcade area and karaoke, along with a bar and numerous pool tables. Once in, the reception is easy to locate. £16pp for 3 games including shoe hire was a good price, especially for London and especially compared to what some of the chains charge, even up north!

The receptionist was very friendly and perhaps a little taken aback when I said I was attempting to 'tick' off all of the bowling alleys in the UK and that this was my 89th!

As for the quality of bowling, the lane was excellent, ball selection very good and no lane faults, either.

Interestingly decorated, it even had a rowing boat replica attached to one of the walls! Place was clean tidy and music not too loud, though perhaps this was because I visited just after 11am and it hadn't long since opened... There was a sign inside advertising the Saturday and Friday night live DJ, so if that's not your sort of thing, then probably best to avoid those times! Alternatively, if that is your thing, then I guess you should pop along. You won't regret it. 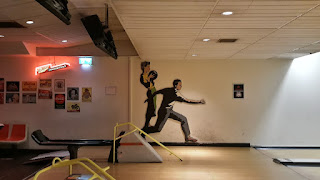 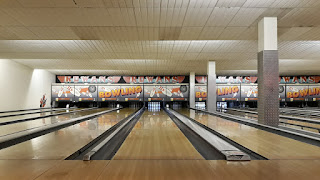 Also of note is Metrodome Bowl, Barnsley. This is a bowling alley located in a sports and leisure complex near Oakwell Stadium (still to visit). I was first made aware of it during the 2017 Weber Cup (Google it) where the competition was held that year. On that day we actually bowled at the other bowling alley in Barnsley (Barnsley Bowl) without knowing they had one in the leisure centre, too. On entering for watching the competition (which was held in the hall), we saw that there was a bowling alley in the Metrodome and had been on our wish list ever since. We had the opportunity to go in summer this year and it was really worth the visit. 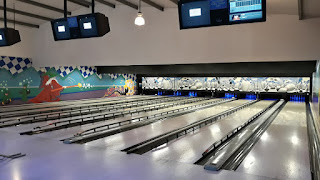 Also of merit is Böckmans Bowling, Bromölla. This one was so special, it's already got it's own blog post. You can read that one if you click here.

On a loosely bowling related note, in January we visited The Flying Pins sculpture in Eindhoven. This is an enormous sculpture of well, urm, flying pins: 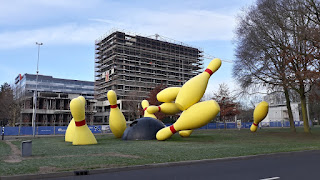 Unfortunately this was the closest thing we managed as for bowling goes whilst in the Netherlands, because we walked five miles to one which was closed! This was no where near the centre of the city, so we were left without any bowling options, as shortly after it was time to catch our flight. All the more reason to revisit…

In 2020, I hope to bowl at at least 45 new bowling alleys, though I understand this will be a tall order: the more centres one bowls at, the target gets harder, because it means travelling further afield to get to a 'new' centre. Luckily, there should be a number of 'easy' ticks in the way of a few dreaded chain bowls we've not yet endured in the Lancashire and Yorkshire area. I have already started kicking around a couple of ideas for my 150th, one strong contender is the alley based in Scotland's Theme Park- that's if I can wait that long...

The Weber Cup is back in England this year (after it was played in USA in 2019) to be held in Leicester 5-7th June. I plan to tie this in with a visit to Leicester's newest bowling establishment, which was opened 2019. I have already ticked off the Hollywood Bowl there. 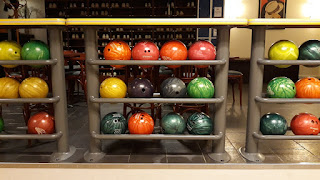 Chorley has recently (21st Dec) opened a brand new six lane bowling alley and Glasgow has had a boutique one built recently in the centre, both I plan on visiting soon.

Lane 7 (small boutique chain) will bring new alleys to Leicester, Sheffield, Durham, Glasgow, Dublin, Bristol and Nottingham, whilst Superbowl UK will bring fresh lanes to Bishop Auckland, Newbury and Barnsley, after having already opened a number of new ones in 2019. This will mean Barnsley will have three centres. Is Barnsley about to become England's capital of bowling..?

Pins on strings. Or are they? The first sanctioned 300 (perfect game) on a QubicaAMF TMS pins on strings lane was bowled at Airport Bowl (Heathrow) by Paul Pasion on the 15th January 2019. Airport Bowl had their lanes converted from the traditional free fall to pins on strings in 2018. It looks like they are here to stay.

There are still no bowling alleys in either Dumfries or Cumbria, besides Eclipse Bowl (Workington).

Well, if you have managed to read to the end of this post, congratulations and I hope it was worth your while. If I have bored you, then I can only apologise! If anyone ever visits a unique bowling centre, then please tag me as I'll love to see! Perhaps I'll start to write more about my bowling ventures on here...

Anyway, until then, it's goodbye from me!
Posted by Flora Martyr at Monday, December 30, 2019