You may remember a while ago I made this hand-painted rotoscope piece:

…And shortly after that, I started working on another. In between then and now, I got a full time gig animating on a super amazing project, I bought some shoes which don’t have holes in and I learnt how to use EbSynth. I also painted all of the 103 frames for this second hand-painted piece, along with having drawn all the outlines frame by frame in TVPaint.

So, the title of this post is called ‘EbSynth Test #2’ and you’re probably thinking, ‘right, so she’s pretty much done all the leg work for this, why is she even talking about her new obsession in this blog post’?

Ok, so I basically didn’t want the outlines or the paint work to have gone to waste, but at the moment, realistically I would never have found the time to produce a piece in the same way I did the first painted one. So I thought this would be a great opportunity to practise colouring with EbSynth. Using it ‘just’ to colour a clip still saves a load of time (it literally took hours to scan and clean up all the individual painted frames in the previous one).

Side note: I am currently working on a piece to get smooth outlines using EbSynth- once I’ve managed that, then there’ll be a post here, so keep an eye out in the next few weeks!

Having the outlines down already put me in an advantage, because it meant I could give EbSynth something more workable to urm, well, work with. Also, another side note: I coloured in her facial features in TVPaint such as eyes, brows, lips etc as I was working quite small when painting this piece and knew painting all that detail would have added on a lot more hours. If I were to do the keyframes again, I would have painted everything as I would only be needing to paint it a couple of times, as opposed to 103. 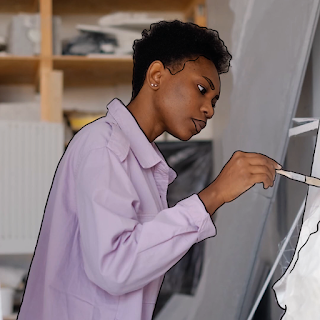 As you can see above, I exported the PNG sequence of both the video file and some of the outlines for EbSynth. Having a solid outline for it to follow, I’m assuming made it easier for EbSynth to give a cleaner output. I also brightened the video slightly, along with adding a little contrast, to make it stand out more.

Once I knew what PNG sequence I’d be putting into EbSynth, I needed to create the keyframes. Like I said at the start of this post, I had already painted all the frames, so it was a case of picking out a couple and scanning those, rather than all of them. As this shot has a head movement and an arm movement, I wanted to make two keys which would give EbSynth enough information of each.

I made keys of the first frame and the last frame:

I scanned in the painted frames at 1200dpi and then exported the outlines from TVP of the relevant frames to Photoshop (this would act as a guide so I could resize the painted versions to match the outlines). Here, I cleaned up some blemishes on the paint work and also erased the white paper surrounds. EbSynth works well with an alpha channel and I didn’t want to sit there afterwards and remove the background of 103 frames or it totally would have defeated the object of using EbSynth. If I removed the background for the keyframes, EbSynth would use that information and keep those sections as an alpha channel too. Cowabunga, dude!

Once I had nice clean versions of the keys, I ran them through EbSynth and waited patiently for it to work it’s magic and 10 or 20 mins later (my computer is crazy slow) I had the frames ready to import back into TVP. Also, with the keys, I switched off the outline layers before inputting them to EbSynth. This was so there wouldn’t be an outline on those layers, as it wasn’t needed and would have made it look messy.

I had no idea how it would turn out, but wow I was happy with the result. It was a lot cleaner than I was expecting. Though it definitely still needed touching up in places: 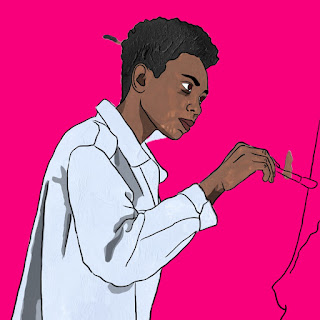 Ignore the pink background- that’s just a placement background as a neutral colour to allow me to see the bits I needed to clean up better. Most of it was a case of just erasing the parts which came out of frame, though there were some bits (mainly on her hand) where EbSynth completely missed the mark. To fill these in, I used the cut brush and made a custom brush from it, allowing me to use the right colour and texture from the painted frames without the new bits standing out or looking weird. Think of it like the clone tool in Photoshop basically.

I also added the shading using EbSynth which I did on a separate layer. I used 3 keyframes for this and then blended them together. I don’t really add shading to my work mainly due to time constraints, though of course EbSynth allows me to add shading without much extra effort. And I must admit it looks a lot better than the stuff I’ve done previously without shading. So shading is going on everything from now on!

An improvement for this would be that perhaps I could have added the shading as I painted it or digitally added it in a more painterly way. Or even used a blend mode to make it feel more ingrained. Anyway...

So what does this mean for an independent animator like myself?

The big one: it saves so much time! I can get more done in a shorter amount of time, allowing me to spend more time focussing on style, look and story, as opposed to that energy going into drawing each frame. It literally is a game changer! To make an independent short or feature, it will really help speed the process up, meaning I could make something in a fraction of the time it would normally take. How cool is that?!

I also don’t think a program like this will be something which takes jobs away from animators. As I have just outlined here, a lot of human work is still needed to create an effective piece. Yes, it speeds up the work, but just think of how a program like this can help the independent feature and short film industry. Less time to produce work = less cost to make work = more independent work produced without having to rely on funding = more diverse, cool, interesting animations. Win.

Ps. I know this post was kind of long- I hope I was able to explain everything in a fairly concise or at least clear manner. If you’ve any questions after reading this on EbSynth or my process, then just drop them below and I’ll try and answer as best as I can.