Every now and again I get the urge to try a rotoscope idea that just pops into my head. Normal, I know. And yes, this is one of them. I've been working for several months now on one project- a self-funded no budget short animation which I touched on in this post. As the project is just for me, well I mean I would love the world to see it when it is finished, but I mean it's not a commissioned piece or anything like that so there is no exterior deadline or pressure (just my self inflicted arbitrary goals). Despite this being a mostly great way of working there are negatives, the main one being no money!
While working on this for a long period, I kept thinking of other ideas of styles I'd like to try which I can't implement in the project I'm working on because I want the look to be consistent. Of course I write these down, but there's only so long they can be kept in one of my notebooks before leaping off the page and onto my Wacom Tablet and into TVPaint. As I'm working on a personal project it gave me the flexibility to pause on that and try something different. I did hold off for a while actually before exploring a new idea (despite being desperate to try), because I wanted to get it to a good place I felt that I could stop at. I feel I need a little break from it now to work out where it is going next anyway. So I may try out a few more ideas in the next few weeks or so, but we'll see...
The idea I wanted to explore was an animation with a specific kind of background. My backgrounds are often quite abstract, or at least for the project I'm working on currently and I really felt like creating something slightly more realistic. Saying that, I still wanted to keep it quite abstract, but not totally. For some reason I felt like doing an exterior shot involving buildings. Below is a still of the footage I downloaded from Pexels. 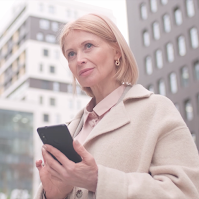 Oh hey stock footage woman! I chose this shot mainly for the architecture and the fact that it was a nice clear piece of footage. I also wanted a camera move in there as I wanted a shot with some motion. The idea I had was to create the backgrounds out of basic shapes using the 'filled stroke' tool in TVP. This meant there would be no outlines and would therefore contrast with the foreground animation. You can view the clip below:
I like this way of creating a background, but one of the main negatives is how labour intensive it is with the camera move. It means drawing every shape multiple times. Not that I'm afraid of the effort (if that was the case I doubt I'd be working 8 hours a day under my own steam), but it feels there should be (or could be) a faster way of doing it. It would add on weeks or months if I were creating a full film in this way.
I went quite simplistic on the buildings on purpose, as I wanted to give more of an impression of them as opposed to a super accurate or photorealistic depiction. This was so the foreground character stood out, while providing a sense of the surroundings. I feel I achieved this well, but I think the buildings might have looked 'better' with slightly less blur. I also wanted more of a distinction between the building in the foreground (the one with all the windows) and the ones in the background. I left out a lot of detail from the buildings further away along with lightening the colours so they look more 'distant'. I feel I could have pushed this further- either by adding more detail to the foreground building, lightening the background buildings more or playing with the blur parameters so that each building has a clear step of blur depending how close to the camera it is.
This is definitely a style I would like to explore further as I don't think it is quite 'there' yet. I feel like several more tests should get it looking closer to what I was aiming for.
Posted by Flora Martyr at Wednesday, November 18, 2020