So what else am I doing during lockdown? Following on from one of my recent posts, I said I was working on quite an ambitious cross stitch project. Well, here it is:

An Eadweard Muybridge Horse in Motion. Every frame hand stitched, taking between 1.5-2 hours each, along with creating the cross stitched patterns (another full days work at least). And then post production (scanning in, importing them into the project, tweaking the frames and so on). For just over 1 second of animation. Dedicated or mad? You decide. Maybe both. 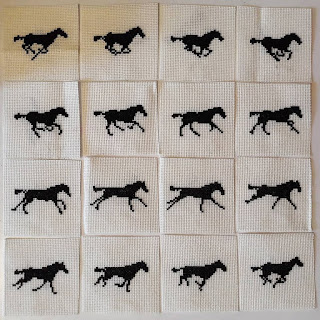 I didn't test out how it would look with the patterns I made before starting the sewing, so for all I knew, it could have turned out looking terrible. Luckily, it turned out exactly how I wanted and couldn't have been happier with the result. I put a lot of work into creating it and I'm pleased it paid off. Now I just need to find a film festival which is accepting entries of films under 10 seconds!
Posted by Flora Martyr at Friday, March 27, 2020 No comments:

Well, this post had to happen at some point didn't it?

I have been social distancing/ isolating since Monday 16th March. Following government advise regarding the matter, plus not wanting to be responsible for spreading the virus amongst others especially the elderly or vulnerable, it is the most responsible thing to do. In fact, the thing to do. The less people you see in person, the slower the virus will spread and therefore 'flatten the curve', putting less pressure under an already compromised NHS. At a time which feels quite helpless, if you are not in a key worker role, then staying at home is literally THE BEST THING YOU CAN DO TO HELP! Like seriously, though. Stay home, save lives.

This doesn't mean you can't get fresh air or have to be 'cooped up' for days on end. You can still go for a walk or for a run/ bike ride/ scoot/ hop/ skip/ jump etc in an open space, providing you stay the 2 metre safe distance away from others. Which is what I have been doing. It doesn't, however, mean spending time socialising with others who are not from the same household as you. I know it might seem like f o r e v e r without seeing friends and relatives or partaking in sports and outdoor hobbies, but in the grand scheme of things, a few weeks to a few months is not actually that bad, considering the amount of lives that could be saved. Also, we are better connected digitally than ever before, with a host of apps that lets you see your family etc, without actually seeing them.

Despite staying inside going against a lot of my thoughts (recovering from an eating disorder which included obsessive exercise) and daily habits/ hobbies, I understand that we all need to be doing our bit to prevent the virus accelerating further. This also illustrates a good sign of recovery on my part, too.

So what have I been doing whilst staying indoors as much as possible?

Tidying up/ cleaning. Perhaps sounds a little boring, but it gives a great sense of achievement and it can even be quite fun once you 'get into it' and start seeing the results. I must admit my partners' and my house is an absolute MESS and the past week we have been making huge headway. Pat on the back, please!

Cross stitch. Okay, well yes maybe I'm a little odd in having taken this up, but in all honesty, I couldn't care less! It's a really fun indoor hobby, which is relaxing, perhaps 'mindful', super creative and also productive (a small part- I mean we are in the midst of a global pandemic here, so being 'productive' is like the last of my worries tbh). You can read a bit more about my cross stitch hobby in a previous blog post here. 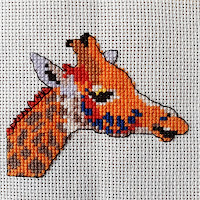 Films. Not many people will know this, probably because I mainly only tweet about groundhopping these days(?) but I am a big, big fan of films. Long before my groundhopping days started, I began an Excel sheet of all the films I watch. This was when I began my Film Production course at university in September 2010 as a way of recording what I was watching. My favourite directors are Mike Leigh, Andrea Arnold, Michael Haneke, and Kelly Reichardt. I have kept my list up to date ever since. I won't spoil you with the numbers at this point, because I'm planning a blog post on this subject specifically at some stage in the future. Aren't I a tease?! Lists aside, watching films have been another form of distraction of late. Some recent ones I have enjoyed are: Only Yesterday (1991), If Beale Street Could Talk (2018), Capernaum (2018), A Silent Voice (2016), American Honey (2016) and Diego Maradona (2019). I would recommend all.

Animation. This is something I professionally 'do' and enjoy doing and something I am trying to keep up throughout this period. If being honest, I have actually found it quite difficult to concentrate with everything that's going on, making it hard to focus on my next short film. This being said, I have managed to get a fair bit completed, though not as much as I would have liked, considering the amount of time on my hands at present. I'm hoping and I'm sure, that once I get more used to this situation/ get my head around what is going on in the world right now, I will be able to concentrate better and produce more work at a high standard. 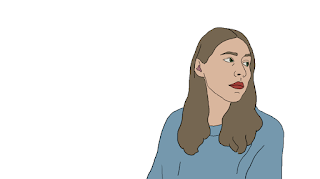 Social media. Less socialising in real life, more socialising online. I have been trying to cut down on my Twitter intake, because most of my time spent on it is aimless scrolling, rather than focussed interacting. I still want to be present on there, especially while these is no football or bowling, but I don't want it to become my life. It's usually worse in the evening when I'm tired or have completed all my daily tasks and don't feel like doing much else. Again, I have been trying to put something in it's place, such as watching a film, playing Scrabble with my partner, reading (which I 100% need to do more of) or doing a Sudoku. Ain't it the life.

Washing hands. Yep, you know the drill. Stay safe all x
Posted by Flora Martyr at Tuesday, March 24, 2020 No comments: 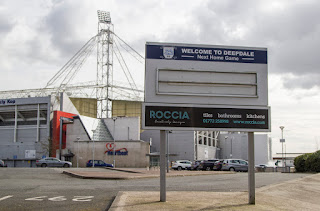 As we all know these are strange and uncertain times and without football being played currently or in the near future, understandably people are at a loss, myself included. I do have plenty of other hobbies and interests to keep me going, but one thing which I was getting a lot of my enjoyment out of lately has been removed. Photographing and watching football has been a key part of my life in the last year or so and with a lot of events coming up which I had booked in to photograph now postponed, it all feels quite gloomy.

Being as what is happening in the world right now is far greater and more important than football and the safety of everybody involved is paramount, I understand the need for the postponements. If honest, I would not even wish for the games to carry on in the midst of this crisis. Annoying as it may be, the more we all pull together and keep to the guidelines given, the sooner this shall pass and we will be watching the game again, looking unto it as even more beautiful than before.
Posted by Flora Martyr at Thursday, March 19, 2020 No comments:

To give myself a bit of a break from my animation, because of feeling uninspired and downhearted due to the gazillion rejections I've had with it recently, I decided to go to Hobbycraft and treat myself to something fun. This would be to take my mind off my work and provide a different type of creative outlet other than photography or animation. Sometimes it's refreshing to have a break and do something which is still creative/ productive, but with no pressure.

So, I decided to buy a cross stitch kit. For a 3"x3" kit, you get a pattern, a piece of material, a needle and a selection of threads in the colours as per pattern. I chose a fairly simple beach hut one as it was vibrant and I love going to the seaside! There are loads to choose from. During 2012 when I was unwell, I did a lot of these cross stitches when in hospital, but I have not done one since. It felt a bit strange, but also pleasing to pick it back up again. 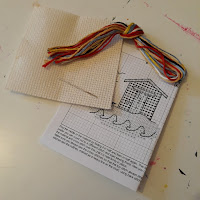 I really enjoyed making it and it was quite easy to get back into the swing of it. It's a really relaxing hobby actually, but does involve a fair bit of concentration. If you're not careful, you might lose count! 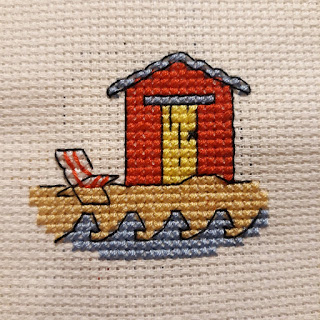 Anyway... once completing it, I thought, well why don't I do my own design next? So that's exactly what I decided to do! 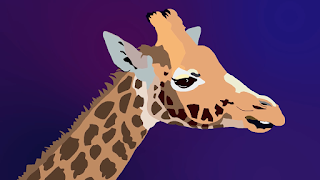 I made a pattern for 16 aida count fabric of the above giraffe. Maybe you recognise it from an animation I made not so long ago? 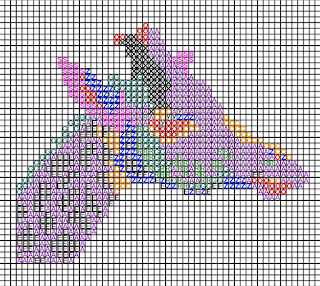 The pattern took a while to produce, because it was a case of putting in each symbol separately. If anyone knows a quicker way, comment please! 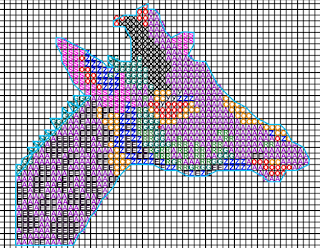 Once the main pattern was complete, I added an outline (in blue, above). This was so the finished piece didn't look so 'pixelated'. I actually 'ad-libbed' the outline when I was sewing it, because some of the lines on the pattern would have seemed a little unnatural otherwise.


Regarding the overall piece, I am pleased with it as it's an achievement in terms of what I have accomplished: a cross stitch from designing my own pattern through to completing it to a good standard. Despite this, as it's my first one, there are bound to be issues and I feel that there are some parts I would improve upon. I feel these will only get better with practise, which is why I have decided to embark on a really quite ambitious project for my next one... Watch this space for more!
Posted by Flora Martyr at Friday, March 06, 2020 No comments: