I've been posting on YouTube since around 2011, but only of the films and animations I make. This however, was a more 'vlog' style thing. I use the term very lightly here, mainly because I'm not sure whether what I uploaded was one!

I have been watching quite a lot of various YouTuber's lately to give me more motivation and get me back into creating things again, which worked, so thank you Minnie Small and Lavendaire (amongst others). I got into watching these, because I wanted to find whether there was a channel dedicated to cross stitching. Yes, this no football thing is really getting to me! I couldn't find one which had more than a couple of videos about the subject, but I did find quite a lot of general arts/ sewing/ crafts channels. I felt I could relate to a lot of what was being said, plus I also found a lot of them inspirational and motivational. It put back some drive in me, which I felt like I had been missing for a number of years, due to series of setbacks which I am learning to overcome.

As the creative person I am, I then got the urge to make a video of my own.

I'm always looking to try new challenges and push myself in new ways to bring out the best in me. I have a massive lack of self confidence, though fully aware of this and always attempting to combat it in various areas of my life. One of the ways I enjoy endure challenging myself is jumping in at the deep end and seeing how I get out. I have learnt that if you just stick to what you feel safe with, you are never going to progress and grow in your life as much as you will if you push your comfort zones. I have often found that the things that I had been scared to do in the past and then carried out and did them, were never usually as bad as I originally thought and the world didn't end.

So, a video where I am talking to camera about a piece of work I had created would be the next logical step, yes? Apparently so. 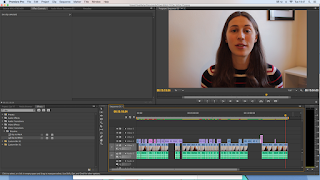 What did I learn?

It is *so much harder* than it looks. Like, really. And this is coming from a person who is experienced in film production. I'm so used to being behind the camera, I never consider it from an actors point of view and how off putting a camera and microphone actually are. There was no one besides me in the house when I was creating the video either, but I still found it somewhat embarrassing. I almost gave up at numerous points, even after recording a take with no audio (I record the sound and image separately, as I use an external mic to get the best quality of sound), though on one take I forgot to press record. Face palm. But I carried on, persisted and feel better for having done so.

It also took a lot longer than I originally thought. Mainly in the edit, because I went through it a number of times to get it the best it could be. It is still no way near 'perfect', but doing something is better than not doing something and if you wait until you're ready, then you will most likely keep making excuses and putting it off. You only regret the things that you don't do, am I right?

How can I improve for next time?

I'd like to be able to deliver what I'm saying in a more concise manner, though I know this will come with practise. The more of these I do, the more confidence I will build, which was one of the main aims for making the video in the first place.


The lighting. I feel I could have been lit in a lighter way, as I do look a bit 'shadowy'. I could have boosted the brightness in post, but by then I just wanted to finish with the video and didn't want to dwell on the editing anymore or I most likely would have talked myself out of it!

Better graphics. I think I could have spent a little longer creating more aesthetically pleasing graphics throughout the video. If I'm honest, they were a little bit of an afterthought and I think that it shows. It would have been 'nice' to add some animation in there, but again, I will ensure to implement these in my next one. It felt like the process was dragging on a little, though the more I do, the faster I will get at them.

I no way proclaim this is the best video ever made (clue: it isn't), but it was a fantastic challenge and learning curve, and I am proud of the fact that I went through with my idea and made it. I enjoyed the process too, which is the main thing.

So where can you see the video? Here: